The halo ring itself was very important for me to get right in this scene. The feeling of looking up and seeing the monumental array lifting into the sky is such an iconic aspect. It's material I made in Quixel Mixer, and I dithered 3D mountains into it.

As a personal project, I began my Halo: CE recreation project with Blood Gulch. Inspired by Quixel's recreation, I set out to learn the same professional level techniques they utilized to bring this map to life while making it true to Halo: CE.

Blood Gulch is the first in a series of Halo: Recreation map's I will be working on. This one established a lot of new ground for me and was a huge learning process. My next map will be one we have not seen remade in any official capacity.

The foliage was painted in 3 sets of "clumps". Clump 1 was larger foliage, clump 2 was medium sized, and clump 3 was the small grass/clover bits. This way I could gradually blend between the 3.

The cliffs and caves that allowed unique player movement on the outskirts of the original map were created as well.

I utilized spline blueprints to build tire tracks and details that I dithered into the terrain paths as well.

I created a blend shader that could blend between sand, rock, and grass, and then painted the terrain by hand.

When painting between the 3 layers, it was important to use the rock layer to blend between the grass and sand.

While the rocks were quixel assets, i created the z-up shader for them in order to control the color of the rock, and also displace a layer of blended sand on horizontal areas of the mesh, to create a realistic layering of sand.

Here's a look into the shader I made for the Z-Up master material. I offered enough parameters for variable changes.

Here is a look into some the options that I was able to produce with the Z-Up shader. I utilized dithering/pixel depth offset for a smooth transition between meshes as well.

When i sculpted the initial passes on the terrain, I initially had an overhead of the original blood gulch as a transparent layer, and I then sculpted in unreal based on the topology of the original.

I modeled the bunker in maya, and textured it with substance painter. The pieces were actually made modularly and I built the bunker inside of UE4.

Halo has always held a special place in my gamer heart. After being inspired by Quixel's recreation of Blood Gulch, I was really interested in seeing if I could achieve a modern take on a Halo map in UE4 by myself. I initially was going to recreate Containment from Halo 2, but I decided to start with Blood Gulch for a couple of reasons. 1, being I have the Quixel recreation to learn from and compare how they achieved certain details. 2, being I figured it would be a good map to start learning terrain sculpting in UE4 on.

The terrain, canyon walls, and Halo ring were modeled/sculpted in Maya initially, then brought into UE4 to organize the map layout. I followed orthographic views of the original map to zone in on accurate layout and topology (making minor adjustments where needed). I worked iteratively on sculpting the terrain, canyon walls, building detailed lighting, and building the skybox around and on the halo array). Foliage & rock meshes are from quixel, & shaders made by me. 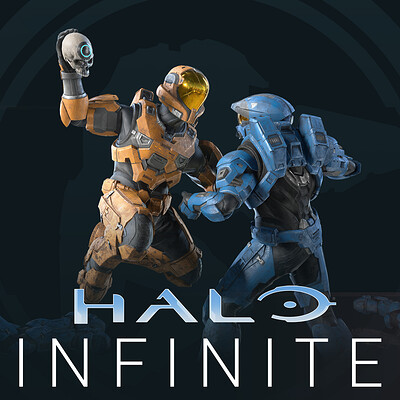